EDIT: I SWEAR I wrote this before seeing a similar, more scientifically rigorous explanation at http://hpmor.com/chapter/23

An integral part of the now-famous Harry Potter series is the purity – or more often, the lack of it – of wizarding blood. Harry is a half-blood, because he’s the child of a pure-blood father and a Muggle-born mother.

There’s no explanation given in the series as to how Squibs (non-magic people of wizarding parentage) or Muggle-borns (self-explanatory term) arise. Here, I present one, based on real-life genetics.

There are two types of gene; dominant and recessive. The dominant one will arise in a child if one copy of it is transmitted, whereas the recessive one needs two copies to be expressed. If we assume that a gene for wizardry can be transmitted just like one for height, or eye colour, everything falls into place.

James Potter came from a line of pure-blood wizards, so it’s safe to say that he had a WW gene configuration (where W is the gene for wizardry, and w is the gene for ‘muggleness’.) Ww is also possible, but not so likely, for reasons I won’t get into here.

Lily Evans, on the other hand, was a Muggle-born witch, which meant that both parents were Muggles, but each with one wizarding gene to pass on. That is, they both had a wW configuration; note that here, w is the dominant gene, and W is recessive. There was a one-in-four chance that Lily would get a W gene from both parents; this applies to any Muggle-born wizard or witch.

Muggle-borns must have two W genes to be a wizard or witch, giving them as much magical ability as any pure-blood (perhaps even more – see Hermione), as it’s possible for a pure-blood to have a Ww configuration. 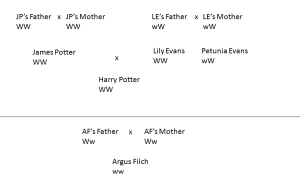 Squibs are the opposite – they are born to magical parents who both give their recessive w gene, leading to a Muggle born of pure-blood parents. It’s reassuring that, with all its magic, the series still complies with what we know of science.

Tune in next week for my assessment of midi-chlorians!